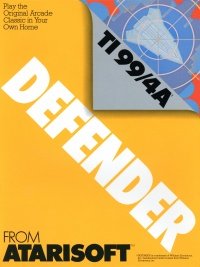 Atarisoft was the brand name for Atari, Inc in 1983 and 1984 that they used to publish their video games for competing computer systems such as the TI-99/4A. From 1983 to 1984, Atarisoft manufactured games for Commodore 64 (green packages), Texas Instruments (yellow packages), Apple II (red packages), and IBM PC (blue packages). The different colored packages assisted purchasers, allowing them to ensure they were buying the correct software for their particular computer system.

Atarisoft was very successful in selling just software, so much so that it was rumored that Atari intended to discontinue sales of all hardware to focus solely on its software sales.

The Atarisoft cartridges, also called Solid State SoftwareTM Command Modules, were shaped differently than those made by Texas Instruments and other software vendors. The back ends of the cartridges were tapered and the labels were shiny silver and printed with black ink. These differences easily helped distinguish Atarisoft cartridges from other vendors.

The list of title that Atarisoft created for the TI-99/4A includes the following: