Picnic Paranoia is an action game originally programmed by Russ Segal for Synapse Software in 1982 for the Atari 8-bit family console. It was ported over to the TI-99/4A by Atarisoft during the 4th quarter of 1983. It was sold as part # RX 8517 and sold for $44.95 (USD). Picnic Paranoia was distributed via Solid State SoftwareTM Command Module. 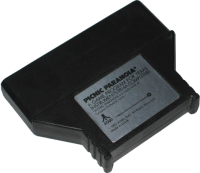 The player in Picnic Paranoia controls "George" who attempts to protect a picnic from ants who try to carry off the food that has been set up on picnic blankets, spiders who weave webs to slow George down and bite him, and wasps that sting and paralyze him. The player must also try to replace food back onto the picnic blankets after it has been removed by the ants. Points are awarded for each item of food remaining on the screen at the end of each round. Rounds last for 90 seconds. The game ends when all the food is removed from the screen. There are sixteen levels or rounds to Picnic Paranoia.

Back of Retail Packaging

George Gets Slap-Happy When Bugs Join the Picnic. Experience new thrills on TI 99/4A. -- Armies of ants aided by stinging wasps and poisonous spiders are out to ruin George's outing. Swat the little buggers or they'll push point-laden food right off the screen. But be careful, insect bites are paralyzing. And only when you help George escalate the conflict with bug spray, can he really turn the tables on these pests.

Insidious insects join George's picnic and try to ruin the fun. They push point-laden food off the screen; and their bites are paralyzing. Help George turn the tables with bug spray! (Requires Joysticks.)

Can George Get Tough and Save His Lunch? 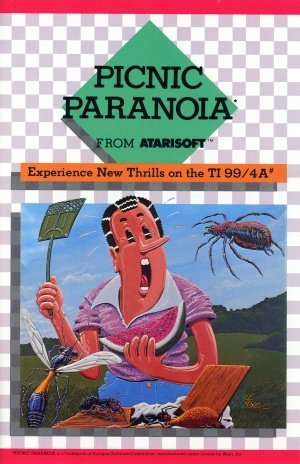 George is having a picnic. Fortunately, it's a sunny day and there is not a cloud in the sky. He's prepared a feast fit for a king and carefully laid it out on neat little tablecloth's. Unfortunately, he spies an unwanted guest. An ant has come onto the tablecloth, attracted by food. Fortunately, George has brought his pest swatter, and he dispatches the ant with a quick flick. The ants are well organized and very hungry, and once the see foo, will continue to attack it. Often they will approach the food and sit just out of range of the swatter, until enough have gotten together to push the food off the table and then off the screen. You must swat them as they try to make off with the goods.

Once one of the ants is eliminated, the food will stop moving, until another ant comes to help the others. George must be quick with his swatter.

Unfortunately, there are stinging wasps in the area and they are just plain nasty. Their only purpose in life is to follow George around and make his life miserable by trying to sting him.

The wasp may be swatted also, but if he stings you, George is deposited in the middle of the screen and is paralyzed for 5 seconds and you will be unable to move him. His face will flash red with embarrassment!

George has also attracted spiders that bite. Although the spiders aren't interested in the food, they are not friendly! All they care about is spinning their webs which must be swatted out of the way in order to get through them, and making sure that no one gets in their way or they will bite without warning. If you are bitten, George is deposited in the middle of the screen and his face will again flash red with embarrassment. George will be paralyzed for 3 seconds and you will be unable to move him. When his face stops flashing, George is again ready for action.

Each piece of food is worth points. The larger the food, the more points assigned to it, and the more ants it takes to move the food off the table. If the ants have managed to move the food off the table, but you have stopped them, you may be able to bring the food back. You must first swat all of the ants blocking the way back to the tablecloth, and then swat the food and drag it back to the table, swatting it again to release it. If you swat the food from the side, you may not be able to drag it back to the tablecloth in one movement. You must release the food (by swatting again), and run around the back where you can push it back onto the table. Though this may sound confusing, you can easily master this technique. The food scores half as many points if it is not on the table when the round ends.

Each round consists of ninety seconds. The time left in the round appears in the top center of the screen. After ninety seconds are up, all action stops and the points for the food remaining are tallied. If all food is completely off the picnic tables, the game ends - if not, the remaining food is then repositioned on the table and the next round begins.

PICNIC PARANOIA will make you think twice about any picnic you've been planning and give you hours of hilarious fun staying home instead!

Each round lasts 90 seconds. Each round progresses in difficulty. You can choose to start the game at any of the first 6 round #'s. The time remaining is indicated at the top of the screen.

Points are tallied after each round is complete. You and George score points in several ways:

Every 5,000 points George earns a can of bug spray. Hitting the letter "S" on the keyboard activates the spray and kills the insects on the screen, but will not destroy spider webs. The accumulated cans of spray are indicated at the top of the screen.