Division 1 is an educational software title created by Scott Foresman for the TI-99/4 and TI-99/4A. Division 1 was distributed during the third quarter of 1982. It was distributed on Solid State SoftwareTM Command Module cartridge. The programmer for Division 1 was Thomas Hartsig who programmed other educational titles for the TI-99/4 and TI-99/4A for Scott Foresman. The original retail price for this software title was $39.95 (USD). Enhancements were supplied while playing Division 1 with the addition of the Solid State SpeechTM Synthesizer (sold separately), providing the student with verbal hints and clues.

By practicing these activities, the player will become more proficient in division skills in a fun way.

Enhances your child's division skills and opens the door to "The Art of Division."

The Division 1 module stimulates the study of base division facts with colorful graphics, challenging drills, and encouraging rewards. With Division 1, Texas Instruments is continuing its tradition of applying innovative Solid State SpeechTM technology of educational activities. The optional Solid State SpeechTM Synthesizer (sold separately) adds the features of computer speech to the graphics and musical sounds of your computer. Your child can now hear, as well as see, the instructions and problems in the module.

Animation, color and graphics teach the meaning of division and its concepts. With enrichment material for earlier grades and remedial for later ones, plus reproducible record forms and worksheets. A Scott, Foresman program. Ages 8-11. (Speech Synthesizer recommended.)

The importance of creativity is frequently overlooked in the teaching of basic mathematical skills. The Division 1 Solid State SoftwareTM Command Module combines creative computer graphics and instructional techniques in its presentation of the fundamentals of division. With this module, the staffs of Scott, Foresman and Company and the Texas Instruments Learning Center expand their mathematics series to help the learner progress from understanding basic division to having a working knowledge of division facts.

While the activities in "The Art of Division" are presented with the stroke of a paintbrush, your child develops skills that let him or her solve the pro bl ems with a stroke of a key. Lively music and rewards help make Division 1 an exciting program.

The Division 1 module advances your child to more difficult activities if 80 percent of the drill problems are answered correctly. lf less than 60 percent of the problems are answered correctly, the computer returns to the tutorial activity, providing your child with more practice. This automation helps to alleviate anxieties caused by consistently incorrect responses, thus making the learning of mathematical skills a pleasurable and rewarding experience.

With this module, Texas Instruments continues its tradition of applying innovative Solid State Speech TM technology to educational activities. Division 1 is designed to work with or without the Texas Instruments Solid State SpeechTM Synthesizer (sold separately). However, the Speech Synthesizer must be attached to activate the voice of the computer. The computer's voice then gives directions, reads the equations, and encourages your child to "Try again" when he or she gives an incorrect answer. The addition of speech strengthens the learning process since your child can hear, as well as see, the correct answers.

The letters and numbers on the keyboard are arranged in the same order found on standard typewriter keyboards. If your child is not familiar with a typewriter or has not used your Home Computer before, take a few minutes to acquaint him or her with the keyboard. Point out the row of number keys at the top and the rows of letter keys below. Show your child how to insert the module and select the activities. This brief "tour" of the computer will help reinforce correct procedures and instill confidence as your child starts out in a new world of computers.

Today, computers are involved in almost every aspect of life. Working with this module can help your child become familiar with computers and their operation. Since computer-enhanced instruction is more common in the classroom every year, this knowledge can give your child an important advantage.

After the Division 1 title screen appears, the computer displays a selection list of the nine activities in the module. 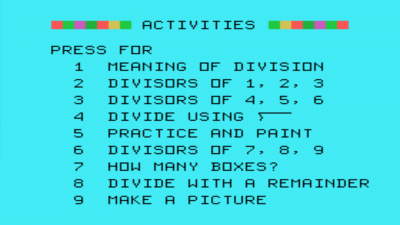 Your child presses the number corresponding to the activity he or she wants to play. For this sample activity, press 2 for Divisors of 1, 2, 3. (We'll assume that the Speech Synthesizer is attached for this example.)

The next display asks if you want a teaching example or practice exercises. If your child presses 1, a tutorial example is given. Pressing 2 goes immediately to the drill exercises. To continue this sample activity, press 1.

After one tutorial example is given, your child is asked if he or she wants to see another one. If your child wants another example, press 1 for Yes. If he or she is ready to go on to the drill, press 2 for No. When your child is finished, press BEGIN to leave the drill and return to the activity selection list.

The "cursor" is displayed as a flashing white box. It prompts your child to respond. When the cursor is flashing, you may answer a problem or change displays.

Each time your child gives a correct answer on the first or second try, the computer responds with a visual reward, accompanied by a short melody. These rewards reinforce correct answers and help motivate your child to continue.

If an incorrect response is made on the first try in any activity except 9, the computer assists your child by counting groups or objects, or by displaying the corresponding multiplication problem. If two consecutive incorrect answers are made, the module provides the answer to the problem. In Activity 9, the computer supplies the correct answer if the problem is answered incorrectly on the first try. In addition, if your child does not score 60% or better, another teaching example is given.

The nine activities in the Division 1 module are designed to strengthen your child's division skills. Activities 1, 2, 3, 4, 6, 7, and 8 provide the option of selecting a tutorial routine or going directly to the drill. Each tutorial example gives your child the option of viewing more or progressing to the drill portion. Because Activities 5 and 9 are designed as review activities, they do not offer tutorial examples. We suggest that you read through this section completely so that you can help your child select the appropriate starting activity.

The first activity demonstrates the meaning of division by displaying a random number of objects and then evenly grouping these objects. The activity explains how many objects there are in all and how many objects there are in each group. Then the computer counts the groups for your child. The drill asks your child to determine the number of groups.

Activity 2 displays a random number of objects evenly grouped in boxes and indicates how many objects there are. Next, the corresponding word sentence appears. The boxes then are counted, and the total moves to the answer position in the word sentence. The corresponding division number sentence appears below the word sentence. After displaying a random number of grouped objects, the drill uses divisors of 1, 2, and 3 and asks your child to complete the number sentence by determining the number of groups.

This activity displays a random number of objects and indicates how many objects there are. Then the objects are evenly grouped. It is similar to Activity 2 but extends the randomization to include division problems using divisors 4, 5, and 6. The drill asks your child to complete the division sentence by indicating the number of groups.

Practice and Paint lets your child creatively practice division facts for divisors 1 through 6. A painter's palette displays the numbers 1 through 9. A division problem appears in the center of the palette. Your child presses the SPACE BAR to move the cursor clockwise around the numbers on the palette. When the correct number is reached, he or she presses ENTER. Your child has two chances to find the correct answer and the computer keeps score by "painting" a square in the score box each time a correct answer is given.

This activity extends the concept of division by grouping objects to include divisors of 7, 8, and 9. A random number of objects appears on the display. As the objects are grouped and the groups are counted, the horizontal division problem appears, followed by the vertical division problem. A check is given by multiplying the divisor and quotient together. Your child solves the problems in the drill by determining the answer to the horizontal or vertical division problem. If a wrong answer is given, multiples of the divisor are displayed to help your child solve the problem.

Activity 7: How Many Boxes?

Activity 7 presents a word problem that identifies a number-grouping situation and introduces the concept of remainders. A random number of objects appears on the display and the objects are then evenly grouped into boxes. Next, the computer counts the remaining objects. The drill asks how many boxes are needed to group the objects evenly according to the situation presented in the word problem. If a wrong answer is given, the objects are evenly grouped in the correct number of boxes and your child can try again. After your child indicates the correct number, the computer counts the remaining objects.

Activity 8: Divide with a Remainder

Divide with a Remainder displays a vertical division problem with the corresponding number of objects above it. The problem is solved with the remainder being displayed. The drill presents vertical division problems. Your child is asked to select the closest quotient. The divisor and quotient then are multiplied and the answer is shown in the problem. Next, your child must solve for the remainder. If a wrong quotient is given, the objects are displayed evenly in groups with remainders. If your child guesses wrong again, the computer counts the number of groups and displays the quotient in the problem. Your child then must solve for the remainder. If your child cannot give the correct remainder after two tries, the computer works out the problem and displays the correct remainder.

This activity asks your child to solve division problems in both horizontal and vertical formats to create a picture. Each correct answer adds one piece to the picture. Your child must answer 10 problems correctly to complete a picture. After three pictures are completed, the computer displays any problems that were answered incorrectly and encourages your child to "Study these for next time." If 80 percent of the problems in Activity 9 are answered correctly in the third picture, your child can continue with the activity "Extra for Experts." This activity offers five multiplication and five division problems. Your child is asked to solve the problems by typing the missing element of the problem. The computer keeps score by "painting" a square in the score box each time a correct answer is given.