Dragon Mix is an educational software program created by Developmental Learning Materials (DLM) for the TI-99/4 and TI-99/4A home computer system. Dragon mix helps students with multiplication and division problems and is aimed at pupils from 3rd to 11th grades. This Mathematics title was programmed by Mary Ann Six and was released during the first quarter of 1983. Dragon Mix originally retailed for $39.95 (USD). DLM created educational titles which the termed "Arcademic" programs, an amalgamation of the words academic and arcade. The intention was to create software entertaining enough, like a video game, that would keep the player playing and learning at the same time.

The player in Dragon Mix is represented by a dragon which stands underneath a city with three skyscrapers on the right-hand side of the screen. Three alien ships advance on the player, each displaying either a multiplication or division problem. The dragon's tongue continuously moves up and down at a set speed. The dragon displays an answer to one of the three mathematical problems. The player's object is to wait until the dragon's tongue is pointed toward the spaceship that has the multiplication or division problem that the answer on the dragon's belly satisfies. The player then fires a laser by using either the Fire button on the joystick or by pressing either the Q, Y, or Space Bar on the computer keyboard. If the player aligns the correct answer to the correct problem, the enemy ship is destroyed. If the player is incorrect, the alien ship advances one extra space forward. If an alien ship reaches the mid-point of the screen, then one of the three skyscrapers is destroyed, and the screen resets with three new alien ships. The player, then, using his/her dragon, is to correctly destroy each alien ship during the allotted time, and make as few mistakes as possible.

An arcade format provides fun and challenge while increasing math skills in multiplication of numbers from 0 to 9 and division problems with answers from 0 to 9. Suitable for children from grades 3 through 11.

The fire-breathing dragon stands guard, but enemies are invading the city. You control the dragon's fire. Only rapid-fire correct solutions to multiplication and division problems can save the city. Builds discrimination skills in Multiplication and Division. A DLM program. Ages 10-12. (Joysticks recommended.)

Your ARCADE MIC SKILL BUILDERS IN MATH program makes learning fun, exciting, independent, and successful. Your players will like learning!

Developmental Learning Materials and Jerry Chaffin and Bill Maxwell of the University of Kansas have developed six programs to help your child learn the four basic math operations of addition, subtraction, multiplication, and division. Four programs emphasize each of the math operations, and two programs develop discrimination between math operations by presenting problems in both addition and subtraction or in multiplication and division. In all six programs, an arcade game format uses colorful graphics and lively action to create an exciting, involving atmosphere for learning.

The arcade game format of Dragon Mix is a fast-paced version of attackers versus defender. The attackers are space ships that have multiplication or division problems on their sides. The defender is a dragon, controlled by your child, that "equalizes" the alien ships with the correct answer. The challenge of different levels of skill and problem difficulty encourages your child to improve his or her speed and accuracy. The colorful graphics and sound effects of Dragon Mix enhance the action and add to the excitement.

As the game is played, the total of "hits" (correct answers) and "misses" (incorrect answers) is displayed at the bottom of the screen and updated after each shot. At the end of the game a RECORD YOUR SCORE screen appears. This screen shows the totals for that game and the lowest and highest game totals for the session. But whatever the score, your child is gaining valuable practice in solving simple multiplication and division problems each time she or he plays Dragon Mix.

The letters and numbers on the keyboard are arranged in the same order found on standard typewriter keyboards. If your child is not familiar with a typewriter or has not used your Home Computer before, take a few minutes to acquaint him or her with the keyboard. Point out the row of number keys at the top and the rows of letter keys below. Show your child how to insert the cartridge and select the activities. If your child is using Wired Remote Controllers, or joysticks, show him or her how to connect the joysticks to the console and practice using the joysticks in an activity. This brief "tour" of the computer will help reinforce correct procedures and instill confidence as your child starts out in a new world of computers.

When the game begins, three space ships are displayed along the left edge of the screen, each with a different multiplication or division problem on its side. These ships advance one at a time toward the right, attacking the city and its defending dragon.

The object of Dragon Mix is to "equalize" the space ships with the dragon's fire blasts before the ships destroy the city. To do this, your child first determines which ship's problem is answered by the number the computer displays on the dragon. Then, when the dragon's tongue is pointing toward that ship, she or he makes the dragon blast fire by pressing the Q or Y key or the SPACE BAR. If joysticks are used, press the FIRE button to make the dragon blast fire.

When the number on the dragon correctly answers a ship's problem, the fire blast "equalizes" the ship, disintegrates it, and scores a hit. Each time a ship is equalized, another ship with a new problem takes its place at the left edge of the screen, and the attack continues.

When the number displayed on the dragon does not correctly answer a ship's problem, blasting the ship scores a miss, and it advances again.

If a space ship is not equalized before it advances to the middle of the screen, that ship blasts one of the city's skyscrapers with its laser. The laser blast ricochets inside the skyscraper and atomizes it.

When a skyscraper is destroyed, all the ships disappear from the screen for a few seconds. Then three new ships with new problems appear along the left edge of the screen, and the attack resumes.

If the ships destroy all three skyscrapers before the game's time limit has expired, the game is over.

When your child selects Dragon Mix, the OLM title and copyright screens appear, followed by an instruction screen which says PRESS ANY KEY TO PLAY. When this instruction screen appears, your child has two choices. One choice is to begin a preset game. Pressing any key on the computer keyboard begins a game at a skill level of 7 with multiplication problems using numbers from 0 to 9 and division problems with answers from 0 to 9. This preset game lasts for two minutes and is played on the keyboard.

Joystick Control (Y/N): the use of the keyboard or of the optional joysticks (Wired Remote Controllers) to play the game. Press Y for Yes if your child wishes to use joysticks. To play using the keyboard, no change is necessary because the preset game uses the keyboard and N is already recorded on the screen. 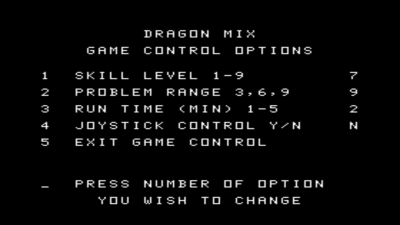 Note: Pressing QUIT or turning off the computer resets the computer to the preset options for the game. For example, if you want to use joysticks, you must select the joystick option when you first begin to play.

Length of Tim of the Game

When the game has been played for the time period selected, the game ends and the RECORD YOUR SCORE screen appears. To begin another game, press any key or press AID to change game options. (Note: If the space ships destroy three skyscrapers, the game also ends.)

The total for hits and misses scored in each game appears at the bottom of the screen and is updated after each shot. At the end of each game, the RECORD YOUR SCORE screen appears, showing total hits and misses for the game just completed, the lowest score, and highest score for each session.

When the RECORD YOUR SCORE screen appears, press any key to begin playing again, or press AID and choose any of the options available with Dragon Mix. For example, you might choose to increase the speed at which the game is run or lengthen the time of play.