Alligator Mix is an educational software title intended to help younger learners with Math. Developmental Learning Materials (DLM) who helped create the software for Texas Instruments (TI), calls the software an Arcademic title, an amalgamation of academic and arcade. The idea was to create a game that was educational, yet entertaining enough to encourage learners to keep playing. Alligator Mix was programmed by Mary Anne Six and was released in the first quarter of 1983. Its original retail price was $39.95 (USD).

In Alligator Mix, a series of apples, with mathematic expressions written on them, travels towards the player, represented by an alligator that has a potential answer displayed on its side. If the answer on the alligator is correct, the player presses the Space Bar to open the mouth. If the answer is incorrect, the player keeps the alligator's mouth closed. As the player correctly answers questions, new alligators are created above the current alligator. There are five levels of alligators. Each one is higher up, and further left, giving the player less time to decide if the answer is correct or not. This makes the game more difficult as the game proceeds.

From the Front Cover

An arcade game format provides fun and challenge while increasing math skills in addition and subtraction of numbers from 0 to 9. Suitable for children from kindergarten through sixth grade.

Alligators rise from a swamp to be fed. But they eat only the correct answers to addition or subtraction problems! You must feed them successfully. Builds discrimination skills in Addition and Subtraction. (Wired Remote Controllers recommended.)

Your ARCADE MIC SKILL BUILDERS IN MATH program makes learning fun, exciting, independent, and successful. Your players will like learning!

Developmental Learning Materials and Jerry Chaffin and Bill Maxwell of the University of Kansas have developed six programs to help your child learn the four basic math operations of addition, subtraction, multiplication, and division. Four programs emphasize each of the math operations, and two programs develop discrimination between math operations by presenting problems in both addition and subtraction or in multiplication and division. With all six programs, an arcade game format creates an exciting atmosphere for learning, using colorful graphics and fact action.

Alligator Mix, one of the six Solid State Cartridges, can help your child increase skills in addition and subtraction of numbers from 0 to 9 and develop discrimination between these two basic math operations. Alligator Mix is learning combined with fun. Your child plays an arcade game while learning essential mathematical principals.

The setting for Alligator Mix is a swamp populated by friendly-but finicky-alligators who will only eat an apple if the problem on the apple matches the answer which appears on the alligator's body. As the apple displaying either an addition or subtraction problem moves across the screen toward the mouth of the alligator, your child decides whether the answer and problem match.

Your child experiences colorful evidence of success each time a problem and answer are correctly matched. Alligators swallow correctly matched apple-problems. Repeated success in feeding one alligator lures another alligator to raise his eyes above the water. Further success in matching problems to answers causes the alligator to lift his head. Finally, the alligator appears completely and is ready for his own set of apple-problems. Sometimes the rapid movement of an alligator will even startle a fish who jumps-with musical sound effects-out of the water. Alligator Mix also records your child's score of "hits" (correct answers) and "misses" (incorrect answers) in the swamp at the bottom of the screen.

The letters and numbers on the keyboard are arranged in the same order found on standard typewriter keyboards. If your child is not familiar with a typewriter or has not used your Home Computer before, take a few minutes to acquaint him or her with the keyboard. Point out the row of number keys at the top and the rows of letter keys below. Show your child how to insert the cartridge and select the activities. If your child is using Wired Remote Controllers, or joysticks, show him or her how to connect the joysticks to the console and practice using the joysticks in an activity. This brief "tour" of the computer will help reinforce correct procedures and instill confidence as your child starts out in a new world of computers.

When your child answers the first three problems correctly, the eyes of a second alligator appear. On the fourth correct match, the head appears. With the fifth correct match, another hungry alligator is ready to be fed his own set of apple-problems. A total of five alligators can appear on the screen.

When a miss occurs, the number of problems which the child must attempt in order to bring another alligator to the screen changes from five to ten. If your child misses no more than one problem in the set of ten, the next alligator will begin to appear section by section as he does in a successful set of five problems. If your child misses a second problem in a set of ten, he or she will be given additional opportunities to answer enough problems correctly to bring the next alligator onto the screen.

If your child misses three problems in a set, the alligator disappears, and your child must begin a new set of problems on the alligator below. If these three misses occur on the first alligator, the screen turns black for two seconds and a new alligator appears. If three alligators disappear in one game, the game ends and the Record Your Score screen appears.

When your child selects Alligator Mix, the DLM title and copyright screens appear, followed by an instruction screen which says PRESS ANY KEY TO PLAY. When this instruction screen appears, your child has two choices. One choice is to begin a preset game. Pressing any key on the computer keyboard begins a game at a skill level of 7 with addition and subtraction problems using numbers from 0 to 9. This preset game lasts for two minutes and is played on the keyboard.

Joystick Control (Y/N): the use of the keyboard or of the optional joysticks (Wired Remote Controllers) to play the game. Press Y for Yes if your child wishes to use joysticks. To play using the keyboard, no change is necessary because the preset game uses the keyboard and N is already recorded on the screen. 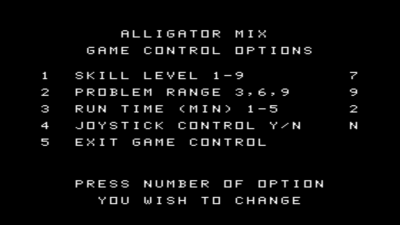 Note: Pressing QUIT resets the computer to the preset options for the game. For example, if you want to use joysticks, you must select the joystick option when you first begin to play.

Length of Time of the Game

When the game has been played for the time period selected, the game ends and the Record Your Score screen appears. To begin another game, press any key or press AID to change game options.

Alligator Mix keeps score of hits and misses in two ways. As the game is played, hits and misses are tallied one by one in the score-keeping area in the swamp at the bottom of the screen. At the conclusion of the game, the Record Your Score screen appears, showing total hits and misses for the game just completed, the lowest score, and highest score for each session.

When the Record Your Score screen appears, press any key to begin playing again or press AID and choose any of the options available with Alligator Mix. For example, you might choose to increase the speed at which the game is run or lengthen the time of play.