Adventure: Pirate's Adventure, more commonly known simply as Adventure, is a video game developed for the TI-99/4A home computer system (and many other computer systems) distributed on both Solid State SoftwareTM Command Module with accompanying cassette tape or floppy disk. This cartridge and cassette or disk contain Adventure #2: Pirate's Adventure. The cartridge can be used to play Adventure's 1 - 12, along with two Questprobe titles, although all other Adventure game cassettes or floppies had to be purchased separately.


It was programmed by Alexis and Scott Adams and released in the fourth quarter of 1981 by Adventure International, a company created by Scott and Alexis Adams. Adventure sold for $49.95 (USD). Scott Adams had completed Adventure #1 earlier, although to do so, he ended up ignoring his then-pregnant wife, Alexis, who seemingly disapproved of his endeavor. However, shortly thereafter, Alexis unexpectedly announced her desire to write a follow-up Adventure and helped Scott with the programming. [3]

All games playable with this cartridge (although only game #2 - Pirate Adventure can be played without purchasing the remaining cassette tapes or floppy discs, include the following:

Adventure is a text-based game lacking any graphical elements. The game proceeds based upon the player's decisions when faced with various question. Due to its decision-based gaming model, each adventure can be played multiple times producing unique endings based upon the decision sequence the player chooses on each attempt.

Adventure takes you on a variety of challenging adventures, depending on the cassette- or diskette-based game you use with the command module. Pirate's Adventure, the game included with the module, challenges you to score points by discovering treasures.

Have you ever dreamed of going on an Adventure and facing numerous challenges along the way? With the Adventure Solid State SoftwareTM Command Module and one of the many cassette- or diskette- based games developed by Adventure International Incorporated, you can experience many different adventures without leaving the comfort of your home.

You're on a fantasy island - a world teeming with monstrous evils. But you've got to stay, because 13 treasures are hidden here and you must unearth them and escape! Only logic and ingenuity can help you defend yourself.

You are standing on the edge of a high cliff. To your left, you see a hungry python slithering your way. To the right, a quicksand bog surrounded by bleached bones awaits unsuspecting travelers. Behind you a large grizzly bear blocks the only path into the forest. Suddenly, you notice a sturdy rope hanging over the edge of the cliff. But -- there's a thick mist below so you can't see where the rope leads. Should you chance climbing down the rope, or should you try to kill the python or the bear?

With the Adventure Solid State SoftwareTM Command Module and one of the many cassette- or diskette-based Adventure games developed by Adventure International, Incorporated, you can face challenges similar to this one. The program describes the situation and waits for you to decide the action you want to take. Based on your choices, you might find valuable treasures, free a count trapped by an evil spell, or save the world's first automated nuclear reactor - all without leaving the comfort of your own home.

To play Adventure, you need both the Adventure Command Module and a cassette- or diskette-based Adventure game. The module contains the general program instructions which are customized by the particular cassette tape or diskette game you use with it. For your convenience, one game, Pirate's Adventure, is included with the module. For a description of, and ordering information for, other Adventure games, see "Other Adventure Games" in this manual. Before you begin playing, note that each Adventure game challenges your powers of logical reasoning and may require hours, or even weeks, to complete. To leave a game and continue it at another time, you can save your current adventure on a cassette tape or diskette.

When you select the module, the title screen appears. Press any key to continue. The program then asks you to answer a few preliminary questions before the game actually begins. First, the computer asks where the data base is.

To play a cassette-based Adventure game, insert the tape into your recorder and position it at the start of the game (see "Loading Cassettes"). Then type CSl and press ENTER. Now follow the step-by-step instructions on the display to load the game into the computer's memory.

If the game is on diskette, insert the appropriate diskette into Disk Drive 1. Then enter the name of the data base as DSK1.filename, where filename is the name of the game on the diskette. For example, with a file name of A2, you would type:

and press ENTER. The game then automatically loads into the computer's memory.

Each game begins with a brief introduction to the Adventure series. When you finish reading this information, press ENTER to continue.

The program now explains the word or direction abbreviations that are allowable in the game and then asks, "Do you want to restore a previously saved game?" At this point, you choose to continue a previous game or begin a new game. To continue a game from a previous session, remove the Adventure tape from the cassette recorder or the diskette from Disk Drive 1. Next, insert the tape or diskette which contains your previous game. (For a tape, be sure it's positioned properly as explained in "Loading Cassettes.") Now, type Y for "yes." The program then asks for the file name of the saved game. With a cassette tape, enter the name as CSl. For a diskette, enter DSK1.filename, where filename is the name you gave the game when you saved it. The computer then loads the program into memory, and the game continues from the point where you stopped.

If you are starting a new game or did not save your previous game, answer N for "no" to the question about restoring a previous game. The adventure then begins.

You are now ready to start an adventure. If you are playing "Pirate's Adventure," the game included with the Adventure module, the following display appears next. 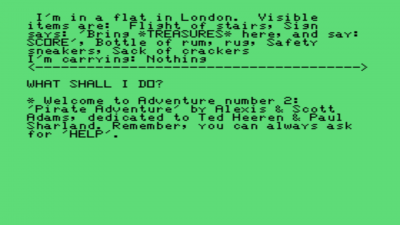 In most Adventure games, the top of the display gives a brief description of your location, the visible items, the directions in which you can move, and the items you are carrying. Any additional background information needed for the game appears below the line and moves down to about the middle of the display. The question "WHAT SHALL I DO?" is then displayed below the line, followed by the cursor (a flashing underline).

Now it's your turn to give the computer instructions. Type a two-word command consisting of an action verb followed by a noun, and then press ENTER. For example, if one of the visible items is a bottle, you could enter LOOK BOTTLE or TAKE BOTTLE.

Since the direction commands are entered so often, you can simply enter the directions as N (North), S (South). E (East). W (West), U (Up). or D (Down), without a verb preceding the direction. In addition, as noted at the beginning of the game, the program only "reads" the first three or four letters of each word so that you can abbreviate any of the commands.

If you enter a command that the program doesn't understand, it tells you so. First, check for spelling errors. If the spelling is correct, try rewording the command, or enter a completely different command. Each time you enter an acceptable command, the computer responds. Check the top of the display for any changes the command may have caused. If no change occurs, try a different command.

To help you enter commands, some of the common acceptable verbs are listed here.

The nouns or directions that you enter to complete your commands are taken from the list of visible items or directions shown at the top of the display. Note: Sometimes when you enter a command to TAKE an item, the program tells you that you are wearing it; at other times, you must enter WEAR item if you want to put the item on.

You now have the basic information needed to play the game. To keep up the spirit of adventure, you're on your own from here. Good luck! 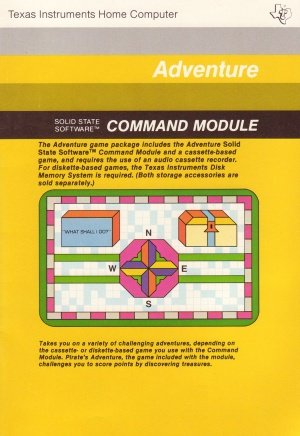 1981 Adventure Manual Cover
As you play an Adventure game, you may decide that you want to continue the current game at another time. Or, you could be faced with the possibility of losing the game on your next move. If so, save the game before entering your next command. Then, if you lose, you can reload the game and try a different move.

To save an Adventure in progress, enter the command SAVE GAME when the program asks, "WHAT SHALL I DO?" Next, the program asks you to type the file name for saving the game. Remove the Adventure game cassette tape from the recorder or the diskette from Disk Drive 1. Then insert the tape or diskette on which you want to save the game. Now type the file name as explained here.

For a cassette tape, type CS1, and press ENTER. Then follow the instructions on the display. The game you save replaces any other information on the tape.

With a diskette, type DSK1.filename (the name you give the game}, and press ENTER. Be sure that a file with the name you choose is not already on the diskette. Otherwise, the game replaces that file.

After you save the game, the computer asks again, "WHAT SHALL I DO? To continue the game, enter a command. To stop the program, enter the QUIT command. If you are playing "Pirate's Adventure" and enter QUIT, you see the number of stored treasures and the corresponding score. The program then asks if you want to try this Adventure again. To leave the program and return to the master title screen, type N and press ENTER. To play the same game again, enter Y. You are then asked if you want to reload a previously saved game. Press either Y or N, and continue as you did at the beginning of the game.

Note: The module allows you to save a game played with one Adventure program and then load it back into the computer with a different Adventure program. However, if you do this, you can get unusual results as you play the game, unless you are playing a multi-part Adventure game.

If you enter the command QUIT or lose the game in some way, such as being eaten by a dragon or getting trapped in a tunnel, the program asks, "Want to try the adventure again?" To start the same game again without reloading it, type Y and press ENTER. To stop the program and return to the master title screen, type N and press ENTER.

Note: If you enter the QUIT command, all data stored in the computer's memory is lost. To continue a game at another time, save it on a cassette tape or diskette before entering QUIT.

In addition to the "Pirate's Adventure" game which comes with the Adventure module, the following games are available on either cassette tape or diskette from

To order an Adventure game, write to: