Car Wars is a video game for the Texas Instruments TI-99/4A home computer. Car Wars is a clone of the 1979 Sega game Head On. The player controls a car starting at the bottom of the screen and navigates it through an open grid full of dots. The object is to collect all the dots while avoiding crashing into other cars. The player's car is always moving counter-clockwise. The player, who can never stop the car or change direction, is only able to control the relative speed of the car and move the car across one or two lines of the grid. After the player comes close to collecting all the dots, the other cars begin speeding up.

Car Wars was programmed by Jim Dramis (creator of both Munch Man and Parsec). It was released in November of 1981 and distributed on Solid State SoftwareTM Command Module. Car Wars originally sold for $39.95 (USD).

There are three speeds, identified as slow, fast, and flyin'. Both the player and the computer will move at the selected speed. The three speed-up options are titled late, early, and lookout. The computer's cars will speed up after clearing 150, 120, and 90 dots, respectively.

The player has the ability to speed up at any time by pressing the joystick button, but it is sometimes advantageous to move slowly. 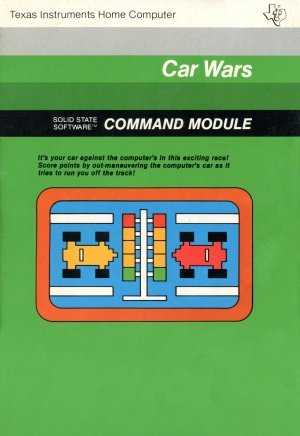 During the play of the game, the player is represented by a red car, and the computer, in the beginning, uses a yellow car. The player's car always moves counterclockwise around the board, and the computer's cars move clockwise.

There are five "lanes," each of which forms a circumference around the board. The outer lanes are larger than the inner ones. The lanes (from inner to outer) have 4, 20, 36, 52, and 68 dots respectively. Each lane is divided into four sectors, with breaks at the 12:00, 3:00, 6:00 and 9:00 points. It is at these locations where lane-changing is possible. The player has the ability to switch up to two lanes at each break, while the computer's cars can only switch one lane at a time.

In the center of the screen is a "pit," where spare cars are displayed. The game begins with two cars in the pit. When a level is cleared, a new car is added to the pit, and bonus points are scored. When a crash occurs, a car is removed from the pit. A maximum of four cars can occupy the pit at any given time. If a level is cleared with four cars in the pit, bonus points are scored, but no new cars are added.

When the game starts, the player's red car and the computer's yellow car face-off back-to-back at the bottom of the screen (6:00 position), and start off moving in the opposite direction.

On the fifth level, the computer adds a third car, which is green. The three cars start at different positions, depending on the level. No new cars are added from this point on.

The object is to clear all 180 dots from the board, which will result in bonus points, a new car being added to the pit (unless full), and advancement to the next level. The maximum score is 99,990. Any scoring thereafter results in the scoreboard rolling over to 0, requiring the player to mentally keep track of the score.

The game ends when the player crashes into a computer car while no spare cars are in the pit.

Enjoy the excitement of high-speed racing, combined with the challenge of out-maneuvering a canny opponent, as you pit your speed and skill against the computer in this challenging, fast-paced game.

With the Car Wars module, you try to:

Here's high-speed racing with a vengeance! This 1-player game pits your speed, skill and strategy against the computer, as you race around the track out-maneuvering a canny opponent. Increase the level of difficulty for even more excitement. (Joysticks recommended.)

If you enjoy the excitement of high-speed racing, combined with the challenge of out-maneuvering a canny opponent, this is your kind of game! With Car Wars Solid State Software(TM) Command Module, you pit your speed and skill against the computer's as you try to get your car around the track without getting "crashed" off the field.

With the Car Wars Module, you try to:

Movement on the screen can be controlled by the Wired Remote Controllers or from the keyboard.

Error creating thumbnail: Unable to save thumbnail to destination

To set up your own game, you need to choose the speed of both cars and to select the point in the game when the computer's car will increase its speed.

You can choose from three speed options which affect both your car and the computer's.

Press 1, 2, or 3 to select when you want the computer's car to speed up. Note that at any time during the game selection process, you can return to the first option selection group (Player/Computer Car Speed) by pressing BACK.

After you select the game options, the playing field appears, consisting of dots and solid lines representing car lanes.

To the left of the playing field is a "traffic light" which signals the start of each game. The current score and the best score in the present series of games are displayed just above the traffic signal.

You can stop a game at any time and return to the option selection display by pressing BACK. To start a game over with the same options, press REDO.

Object of The Game

The object of the game is to clear the dots from the playing field by successfully maneuvering your car through the maze of lanes, without being "crashed" by the yellow computer car. You get three chances to clear the field. The number of cars in the pit show how many chances you have left at any point in the game.

To start the game, press any key. The game begins when the traffic light at the left-hand side of the display turns green to signal "Go!" Then the two cars begin moving in opposite directions around the outside driving lane.

To maneuver your car around the field to avoid the computer's car, press the arrow keys, [UP ARROW] (E), [LEFT ARROW] (S), [RIGHT ARROW] (D), and [DOWN ARROW] (X). To move your car two lanes over, instead of one, simply hold the key down for a moment (this capability provides a strategic player-advantage because the computer's car can move only one lane at a time).

As the game begins, the two cars are traveling at the same speed. The yellow car automatically doubles its speed sometime during the game, depending on the "speed up" level you selected (See "Getting Started"). To accelerate your car, press "Y" (Note that you can also accelerate by pressing ENTER on the TI-99/4 console or the period key on the TI-99/4A console).

If you are using the Wired Remote Controllers, move the lever to direct your car, and press the FIRE button to accelerate.

As you move your car around the field, your object is to clear as many lanes of dots as you can before the computer's car can crash into yours. For each dot cleared in the first round, you receive 10 points. If you successfully clear all the dots without being "crashed", a BONUS message flashes on the display, and bonus points are added to your score. The number of bonus points awarded depends on the type of game you set up, as shown on the chart below.

Thus, you could receive from 200 bonus points, for a game where you've chosen a car speed of "creepin'" and a computer-car speed-up point of "late", to as much as 1,000 points, if you select a car speed of "flyin'" and a speed-up point of "look-out!" When the bonus scoring is completed, an extra player car is added to the pit (you may receive up to four additional cars).

To begin the second round, press any key. The yellow computer car appears in a new starting position. Scoring, bonus points, and additional cars are awarded exactly as in the first round.

If you again succeed in clearing all the dots from the field without being crashed, the third round begins with two computer cars simultaneously attempting to crash your car off the field.

At the two-computer car level, each dot is worth 20 points; and when a bonus is received, double bonus points are awarded.

Should you successfully complete two rounds at this two-computer-car level by clearing all the dots, you can then move on to the three-car level, playing three computer cars simultaneously. At the three-computer-car level, each dot is worth 30 points, and triple bonus points are awarded. The game continues in this way with an additional computer car appearing and more points being awarded after every two rounds.

The game is over when the computer car crashes all the player cars off the field. The computer flashes your highest score for this session with the module on the display.

To play another game with the same options, press REDO. To change the options for the next game, press BACK and the option selection display appears. When you finish playing Car Wars, press QUIT to return to the master title screen.