Blasto is a port of the 1978 Sega/Gremlin arcade game [3] of the same name.[4] Blasto was programmed by Elaine Henshon and Bob Harris. It was published by Milton Bradley, although it was distributed by Texas Instruments. Blasto sold for $24.95 originally, and was made available during the 1st quarter of 1981. It was released on Solid State SoftwareTM Command Module. 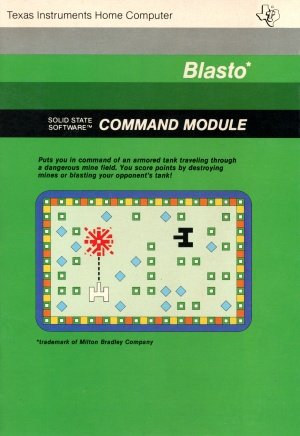 Although a port of an arcade game, Blasto for TI-99/4A has some singular differences that set it apart from the original Sega/Gremlin Blasto. The original Blasto was in black and white (more a product of the era due to technological limitations), versus full color for the TI version. The original featured a spaceship while the TI port portrays tanks blasting away at mines. Besides those two changes, the Texas Instruments port and the original are for all intents and purposes, identical.

There are three options to choose from in one player mode:

Two player mode provides a few unique options. Time limits per round for two-player mode is always 90 seconds. The object in two player mode includes shooting the opponent as well.

Blasto puts you in command of an armored tank traveling through a dangerous minefield. You score points by destroying mines or blasting your opponent's tank!

Experience the thrill of maneuvering a tank through a treacherous minefield! With the Blasto Command Module, you guide your tank through an arena, firing at mines as you go. Based on the number and types of mines you destroy in the allotted time period, points are added to your score.

Tank battle for 1 or 2 players. Destroy a field of mines while avoiding your opponent's fire. A fast-paced race against the clock to hit the most mines, while escaping damage to your own precious vehicle! For ages 10 and up. (Wired Remote Controllers recommended.)

After you select the module, the next display asks you to choose a one- or two-player game. To see a demonstration of Blasto, do not press any key. After a moment, a sample two-player game automatically appears.

When you are ready to set up your own game, press any key and the first option selection display reappears. For information on the keys used to play the game and on the point values of the targets, press AID. The information appears on the display for a short time, followed automatically by the options display. (Once you select all your game options, AID is no longer available.) Then press 1 for a one-player game or 2 for a two-player game.

If you choose a one-player game, you have three additional options:

Based on the type of target you hit, points are added to your score. A typical field consists of small green mines and large blue mines. These mines are positioned at random at the start of each game.

The playing time for a two-player game is always 90 seconds. After you select your playing speed, additional options are displayed.

If you choose Obstacles under Battleground, you are ready to begin the game. If you select Mine Field, the Tank Trails and Mine Density options appear on the screen.

At anytime during the game selection process, you can return to the first option screen by pressing BEGIN.