The Attack is a video game programmed by Tom Pettingill with music and play-balancing programmed by Kevin Kenney. [3] It was produced by Milton Bradley, and distributed by Texas Instruments (TI). It was released in the first quarter of 1981 and retailed for $39.95 (USD). It is an Action Space Shooter game that was distributed via Solid State SoftwareTM Command Module. 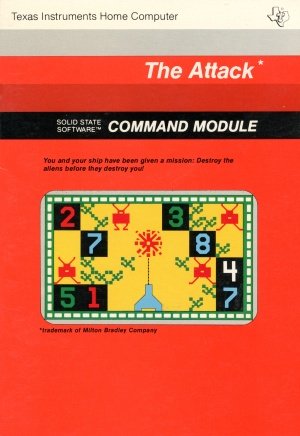 The player controls a spaceship with its weapons that he/she uses to blast apart "spores" that connect together to form dangerous aliens. Once formed, the aliens must be obliterated, else, they will destroy the player. Incubators, black boxes with countdown numbers on them, continually release new spores as the game progresses, or, in later levels, give birth to aliens.

You and your ship have been given a mission. Destroy the aliens before they destroy you!

With The Attack Command Module, you command a ship that is cruising the far limits of outer space. The region is infected by spores. Suddenly, an alien emerges. You, as commander, are the only one who can maneuver your shop to avoid the clutches of an alien and fire your missiles.

You're the commander of a ship in a region of space infested by double-barrelled danger. Both "spores" and "aliens" must be destroyed. Simultaneously, you must maneuver to avoid the enemies and fire missiles to destroy them. (Joysticks recommended.)

The report that outer space is being overrun by aliens has been verified. You, equipped with ten ships and your skill as a commander, are assigned to rid the cosmos of these menaces.

Texas Instruments brings you The Attack• Solid State SoftwareTM Command Module, developed by the Milton Bradley Company. This one-player, four-skill-level game challenges your ability to plan and carry out a successful attack against the onslaught of the aliens. You maneuver your ship through space with the arrow keys or the Wired Remote Controllers. When you are ready to fire, press ENTER or the FIRE button on the handheld controllers. Every time you successfully attack a spore or an alien, you score points. The object of the game is to score as many points as possible by ridding outer space of the aliens. The game ends when the aliens deplete your ship supply.

After you have selected the module, the title screen appears. Press any key to continue. You have just completed the initial stages of activation.

The screen now displays the skill level options and tells you to press SHIFT A (AID) for an explanation of the rules and scoring system. 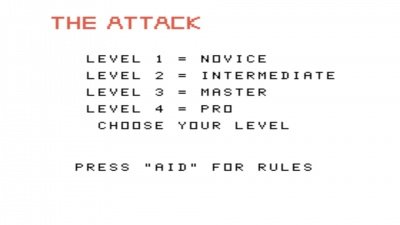 As commander, it is necessary for you to check out all systems prior to final activation. Press SHIFT A (AID) to display this vital information. 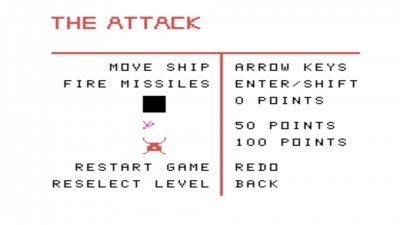 As indicated on the display, you maneuver your ship through space with the arrow keys,

(X), or the lever on the Wired Remote Controllers. When you are ready to fire, press the ENTER or SHIFT key on the console (or the FIRE button on the controllers).

Each black square box or incubator (

). No points are scored if you fire on the incubators. However, each time you destroy a spore or an alien, points are added to your score. Spores are worth 50 points each, and aliens are worth 100 points.

Once you are familiar with the information on the display, you have completed the second stage of activation. Now you are ready to select the skill level for your mission. Press SHIFT Z (BACK) to return to the selection screen.

There are four skill levels of play:

Press 1, 2, 3, or 4 to choose the skill level on which you want to play. This completes the final stages of activation. Good luck on your mission!

Using the arrow keys or the remote controllers, maneuver your ship and begin firing on the spores and aliens. Plan your attack carefully and you'll be able to destroy a line of spores with repeated fire. When four spores cluster together forming a square, music alerts you that a large red alien has appeared. Skilled maneuvering will get you to the alien before it gets to your ship!

Each time you hit a spore, you get 50 points. A destroyed alien increases your score by 100 points, as shown here: 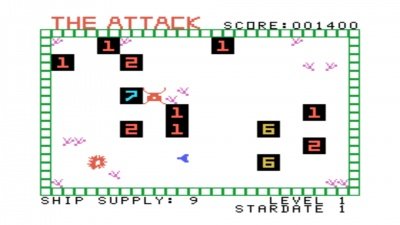 Screenshot of shooting an alien in The Attack

When you are in a stardate where aliens emerge from the incubators, mount your best attack. All hits are doubled! If your attack is extremely skillful and you score 500000 points, the score display rolls over and restarts at 000000. Be sure to add both scores together when calculating your total score.

At the beginning of Stardate 1, you command ten ships. Each time your ship is engulfed by an alien, your ship supply decreases by one. Your attack continues when a new ship appears. A stardate is completed when you have destroyed all the aliens and there are less than ten spores remaining. At this time, bonus points (determined by the level of difficulty and the stardate of the game) are added to your score for the remaining spores. Also, one ship is added to your supply. As the stardates increase, so must your ability to carry out a strategic attack. (Note: To start the current game over with the same level of difficulty, you can press SHIFT R (REDO) at any time during the game.)

When the aliens deplete your ship supply, the game is over. Your score appears in the upper right-hand corner of the screen. To play another game on the same level, press SHIFT R (REDO). To play again with a different level of difficulty, press SHIFT Z (BACK) to return to the selection list. Next game, see if you can increase your score, advance your skill level, spend more stardates in space, or do all three!

To deactivate all systems when you have completed your mission, press SHIFT Q (QUIT) to return to the master screen.