Fathom is an Imagic created action video game for the TI-99/4A. It was programmed by Neil McKenzie and released 3rd quarter of 1983 and released on Solid State SoftwareTM Command Module. It sold originally for $39.94 (USD) as part number PHM 3222.

The goal for the player in Fathom is to ultimately rescue Neptune's daughter, Neptina. She has been kidnapped by the sea Titans and is being held captive against her will. The player controls either a dolphin who navigates through the sea, or a bird who navigates the skies. The goal is to collect the missing pieces of Neptune's trident. As a bird, the player needs to tough all of the clouds while avoiding running into other birds in the air which will reduce the players energy level. As a dolphin, the player needs to touch the seahorses which reveal the trident pieces. Touching octopuses, sharks, and seaweed will also cause the player to lose energy. Once all the trident pieces have been collected, Neptina will be released.

Free Neptune's daughter! Change from a seagull to a dolphin and search the skies and seas for the missing pieces of Neptune's magical Trident. Avoid perilous obstacles on your way. Find all the Trident pieces and you can free Neptina!

Rescue Neptune's daughter. She's chained to a sunken ship, her father powerless to help because his enemies have broken his magical Trident into three pieces. You travel the sky and the sea in search of the pieces, all the while fighting off obstacles to save her! (Speech Synthesizer and Wired Remote Controllers recommended.)

There are 9 levels in the TI-99/4A version of Fathom compared to the Atari 2600's 7 levels. A special message from the programmer is revealed after completing all 9 levels of the game.</ref> [3]

Rescue Neptune's daughter, Neptina! Chained to the bow of a sunken ship, she awaits her freedom. Her father is powerless to save her because his enemies have broken his magical Trident into three pieces. You, Mortal, must travel to the heights of the heavens and the depths of the sea in search of the scattered pieces. Touch clouds and seahorses until you find the magical stars that become a part of the powerful Trident.

With Fathom, you can

Note: Fathom is designed to work with or without the Texas Instruments Solid State SpeechTM Synthesizer (sold separately). However, the Speech Synthesizer must be attached to the computer to activate speech capabilities.

The Quest for Neptun'es Daughter

Enter a fantasy world of adventure as you rescue Neptina. Reassemble Neptune's powerful Trident that has been changed into magical stars and scattered among clouds in the sky and seahorses in the sea. Transform yourself into a seagull or a dolphin to search for the pieces of the Trident. As you travel the sky and sea, the screen automatically shows your progress. Maneuver past invisible barriers blocking your course. Time is short! Your efforts to rescue Neptina rapidly drain your energy. Save Neptina before your energy is gone or she will be held captive forever! 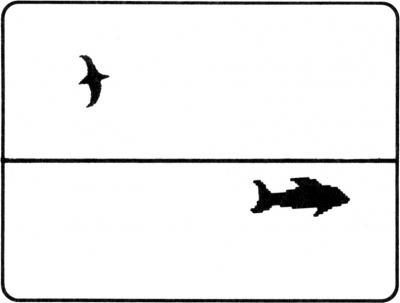 To rescue Neptina, you must find three magical stars. Each star you touch becomes a part of the Trident and appears at the bottom of the screen. You have the power to free Neptina by touching her only after you assemble all three parts of the Trident. 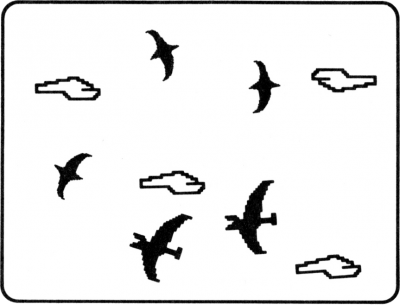 In your search, look to the highest heavens. You may have to search higher and higher as you progress through the game.

In the sky, ravens and volcanic lava slow you down and deplete your energy. Touch each cloud to gain energy. Clouds also may hide magical stars. To uncover a star, you must touch all the clouds on the screen. When a star appears, touch it to form a part of the Trident. 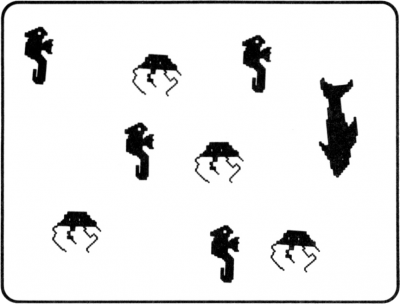 In your search, you may have to swim deeper and deeper in the sea to find the pieces of the Trident.

A void jellyfish, seaweed, crabs, and sharks. They slow you down and deplete your energy. Touch seahorses to gain energy and find magical stars. To uncover a star, you must touch all the seahorses on the screen. When the star appears, touch it and a part of the Trident appears at the bottom of the screen. 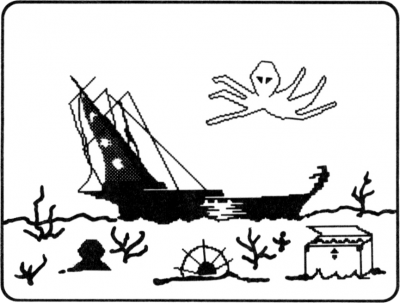 After touching three stars, the Trident is assembled, and you have the power to rescue Neptina. You now face a new challenge-to find the path that leads to Neptina. Avoid entangling seaweed that slows your progress.

When you reach the bottom of the ocean, elude the giant octopus that guards the ship. Touch Neptina to free her. You then gain energy and points and advance to the next level of play.

Traveling through Sky and Sea

As a mortal, you are able to become either a seagull or a dolphin and travel throughout Neptune's vast kingdom. The screen shows only the section of the kingdom in which you are flying. When you reach the limits of the kingdom, an invisible boundary keeps you from continuing. Before you begin your journey, you can press AID for instructions. You can assume the powers of movement of the seagull or of the dolphin by using either keyboard or joystick control.

When the game begins, you have the form of a seagull and can begin yoursearch immediately.

If you have selected the dolphin form and wish to return to the seagull form, you can be transformed only when the dolphin is near the surface of the sea.

Follow these instructions to transform from a dolphin to a seagull.

Soaring through the Sky

Use these strategies in your quest.

Using the Keyboard to Fly

Use these keys to travel through the sky.

Using the Joystick Controllers to Fly

Use the Joystick Controllers to travel through the sky.

You can transform into a dolphin only when the dolphin and the seagull appear on the screen at the same time.

Follow these instructions to transform from a seagull to a dolphin.

Swimming through the Sea

Use these strategies to help you in your quest.

Using the Keyboard to Swim

Use these keys to swim through the sea.

Using the Joystick Controllers to Swim

Use the Joystick Controllers to swim through the sea.

To save energy and plan your strategy, press PAUSE to stop the game action temporarily. When you rescue Neptina, your quest is finished. You are awarded points and advance to the next level. Begin a new quest by pressing REDO or BACK.

You begin each level of Fathom with 100 units of energy. As you travel through the air and sea in search of stars, you gain and lose energy units.

Some obstacles drain more energy than others. The number of energy units you lose depends on the length of time you are stopped by one of these obstacles.

Pausing During a Game

To pause during a game, press the P key. Press any key to resume the game.

If you wish to stop playing the game at any time, press QUIT. The game ends automatically when you run out of energy units.

To play the game again, press one of these keys: