ZeroZap is a shooter-type video game created by Milton Bradley for the TI-99 and TI-99/4A home computer systems. ZeroZap was part of Milton Bradley's Gamevision series that were produced for the launch of the TI-99/4 in 1979. The other titles in Milton Bradley's Gamevision series include Connect Four, Yahtzee, Hangman, Card Sharp, and Stratego. There was also a Gamevision Demo Cartridge containing Connect Four, Hangman, Yahtzee, and ZeroZap that was intended to be viewed in stores, but not be sold. ZeroZap was programmed by Herb Schmitz. It was released in the 3rd quarter of 1979 and retailed originally for $29.95 (USD).

Have fun while becoming a pinball wizard!

Now you can enjoy the fun of playing pinball with the ZeroZap Command Module. Your arrow ricochets off objects and scores points. But be careful not to get "zapped," or your turn ends.

Fast computerized pinball game, with electrifying light and stimulating sound effects. You can change the playing field - creating your own!

It's easy to become a pinball wizard with the ZeroZap Solid State SoftwareTM Command Module. ZeroZap, developed for Texas Instruments by the Milton Bradley Company, lets you challenge the computer or a friend to a game of chance and foresight.

Depending on the type of game you select, you can

In addition, with a cassette tape recorder connected to your computer via the TI Cassette Interface Cable, you can save your own playing fields for later use.

After you select the game from the master selection list, the next display asks you to push any key to play. To see a demonstration of ZeroZap, do not press any key. After a moment, a sample one-player game automatically begins.

When you are ready to set up your own game, press any key and the option selection display appears. The display indicates that you use the left- and right-arrow keys to move the game arrow in the desired direction. When the game arrow is positioned, press the up-arrow key or ENTER to fire. To invert the playing field (change the X's into target diamonds and vice versa), press 1 before firing the game arrow.

When you finish looking at the option selection display, press 1 for a one-player game or 2 for a two-player game.

If you choose a one-player game, you can press ENTER to play, N to select a different playing field, or M to modify the field. 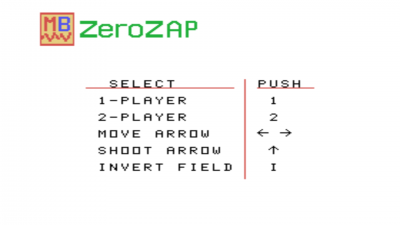 Move the cursor around the playing field by pressing the arrow keys. When you have positioned the cursor where you want to add an X, ◊, or □, press 1, 2, or 3, respectively. To erase an object, position the cursor at the upper-left corner of the object and press 0. To clear the field press SHIFT 8 (*). You can also press W to save a playing field or L to load a field (see Saving and Loading Playing Fields).

When you finish creating the playing field, press ENTER.

If you choose a two-player game, you can press ENTER to play, N to select one of three playing fields, or M to modify a playing field. N and M function as in a one-player game (see "N" and "M" in the "One-Player Game" section). When you finish selecting a new playing field or modifying a field, press ENTER.

After you select the game options, the playing field appears. A red arrow is centered at the bottom of the field.

In either game, press I before firing the game arrow if you want to change the X's into diamonds and vice versa. When the game arrow is positioned, press ↑ or ENTER to fire it into the playing field. You can stop a game at any time and return to the demonstration by pressing SHIFT 2 (@). To start another game, repeat the options selection procedure.

After you fire the game arrow, it moves around the playing field by ricocheting off, horizontally or vertically, the objects on the field. When the arrow hits an X, the X turns into a diamond with a number from 0 to 9 inside. When the arrow hits a diamond, the number inside the diamond is added to your score and the diamond becomes an X. If the arrow hits a diamond that is black and contains a zero, the game arrow has been "zapped." No points are scored, and the arrow falls to the bottom of the display indicating the end of that turn. Your turn is also over if the arrow exits the playing field by ricocheting off an object.

A one-player game is over after five game arrows have been shot. The total score appears in the upper left-hand score box. After an equal number of turns in a two-player game, the player who scored the winning number of points is the winner. In both games, the computer plays a victory tune.

To play another game with the same options, press ENTER. To change the options, press SHIFT 2 (@). When you finish playing ZeroZap, press QUIT to return to the master title screen.