Munch Man is a Pac-Man clone released by Texas Instruments in the 1st quarter of 1982, and was distributed on Solid State SoftwareTM Command Module. It was programmed by Jim Dramis, who also programmed Parsec and Car Wars. It originally sold for $39.95 (USD). Munch Man is one of the most popular titles produced for the TI-99/4A.

Although a Pac-Man clone, Munch Man introduced several differences which make for a unique gaming experience. For example, the Hoonos (equivalent to the Pac-Man ghosts) change from round to round. Each Hoono variety has unique intelligence and capabilities, making it more challenging for the player. There are 20 different Hoonos that the player needs to familiarize him/herself with. With each level, the Hoonos become more aggressive and more intelligent, eventually surpassing the speed of Munch Man.

The Hoonos maintain their color level to level, and each color signifies certain characteristics. For example, the red Hoono is the most intelligent on each level. The yellow is the most stupid but has the ability to disappear for short periods of time.

Another unique feature of Munch Man is that instead of eating pellets to clear the boars, as in Pac-Man, the Munch Man board begins clear, and Munch Man actually lays down links of a chain. To complete a level, the player must completely interlock the chain over the entire maze.

Levels 20, 40, and 60 are completely invisible, although the chain is completely connected, giving the player a fairly good sense of the maze's shape. However, as the player clears the chain, it becomes more difficult to navigate these invisible mazes.

Four cunning Hoonos are in hot pursuit of your Munchman while he races to an energizer to change the attack. Can he make it to safety, or does his fate lie in the mouth of the Hoonos?

Your Munch Man maneuvers through the maze, connecting the passages with a chain, when suddenly four Hoonos begin to close in around him. Can the Munch Man make it to an energizer in time or will the Hoonos devour him in his tracks? You determine the fate of the Munch Man with the Munch Man Command Module.

Munch Man tests your skill as you try to: 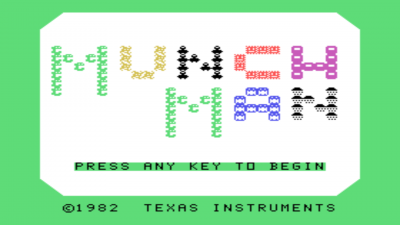 An exciting maze game requiring doubled skills. You must move quickly to out-maneuver hoonos . . . all the while connecting complicated maze passages with a chain. A challenge in coordination! (Joysticks recommended.)

Four cunning Hoonos are in hot pursuit of your Munch Man. Can he make it to an energizer in time to change the attack, or will the Hoonos devour him? With the Munch Man game, you must out-maneuver four Hoonos, as you try to connect the passages with one continuous chain, without being eaten.

The Munch Man module challenges you to:

Movement on the screen can be controlled by the Wired Remote Controllers or from the keyboard. Munch Man is available as either a Solid State Software™ Command Module or a diskette-based game. Note that the diskette-based version requires the TI Disk Memory System, the Memory Expansion unit, and must be used with either the TI Extended BASIC or Editor/Assembler Command Module (all sold separately). Follow the set of directions that applies to your version of the game.

1982 Munch Man Cartridge (Red Label on Black Cartridge
After you select the game from the master selection list, the Munch Man title screen appears. Press any key within two seconds and the maze is displayed. If you wait longer to press a key, the title screen "comes alive" and a chain surrounds the "Press any key to begin" message.

At the top of the display, the maze level is shown in the upper lefthand corner. Beside this number, YOUR SCORE and the HIGH SCORE for this session are displayed. To the right of the scores are two green Munch Men. Your third Munch Man is in the center of the maze, ready to begin the game. Notice the two sets of corridors on either side of the maze. If your Munch Man enters one of these corridors, he disappears and reenters on the other side of the maze.

When the maze is displayed with the "ARE YOU READY?" sign flashing, you are ready to begin the game. Press any key to start. If no key is pressed, chimes sound every minute to remind you to begin the game. After five minutes, the display returns to the title screen.

Press the arrow keys - ↑ (E), ← (S), → (D), or ↓ (X) - to move your Munch Man through the maze. Notice that you don't have to keep holding down the key to make your Munch Man move in one direction; just press another arrow key to change direction. (Note: If you are using the Wired Remote Controllers, move the lever to direct your Munch Man.)

You start the game with three Munch Men, one in the maze and two at the top of the display. Four Hoonos are ready to escape from the square boxes seconds after the game begins. These Hoonos are tricky, so don't let them catch your Munch Man or he'll be eaten!

After your Munch Man leaves the protection of the maze's center, he cannot return to this area. In addition, your Munch Man cannot enter an opening into a Hoono's cell.

If you want to pause while playing a game, press P. The game in progress pauses indefinitely. Press any key to continue the game. When your Munch Man has been eaten, you can either stop the game and return to the title screen by pressing BACK, or begin the game over by pressing REDO.

Object of the Game

1982 Munch Man Cartridge (Bed Label on Black Cartridge
There are four cunning Hoonos that you must out-maneuver or they eat the Munch Man. If your Munch Man is eaten, the maze freezes, returning the Hoonos to their cells, while another Munch Man appears at the center of the maze.

If you completely connect the chain, your Munch Man spins around and then returns to the starting place. Each time the passages are connected, a message appears in the center of the maze, encouraging you to continue. The Hoonos then take on a new shape and appear in their cells. The maze is cleared and a new set of energizers appear in the maze and you are ready to begin the next level. Every third time you connect the passages, the maze changes to a different color.

As you move your Munch Man around the maze, you receive 10 points for every chain linked together. Your score is added automatically at the top of the display.

Each energizer is worth 70 points. When your Munch Man eats an energizer, you are on the attack. The first Hoono captured is worth 100 points; each Hoono after that doubles in value, as shown in the four squares in the center of the maze. Therefore, the second Hoono is worth 200 points; the third, 400 points; and the fourth Hoono is worth 800 points.

For each 10,000 points you score, you receive an additional Munch Man. These Munch Men appear at the top of the display. Only four Munch Men are shown at one time. If you have more than four extra Munch Men, they are not displayed. When a replacement is taken from the top, another one appears in its place.