Chisholm Trail is an Action-Shooter video game created for the TI-99/4A home computer system. It was released during July of 1982 and was distributed as part#: PHM 3110 by Texas Instruments (TI). Chisholm Trail was programmed by John Plaster who also created Tombstone City: 21st Century. It was distributed by Solid State SoftwareTM Command Module and originally retailed for $39.95 (USD). 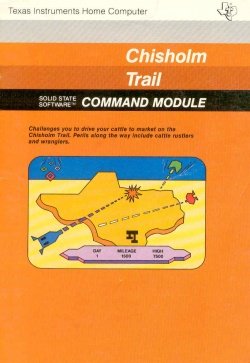 In Chisholm Trail, the player takes on the role of a cattle driver on the trail, trying to push their cattle to specific destinations. The player must defend the heard from the cattle rustlers and wranglers along the way. The wranglers in the game, take on the appearance of brands and will mark your steers as their own. The player gains mileage as points. Rustlers are worth 250 miles each, and wranglers value 150 miles.

Chisholm Trail challenged you to drive your cattle to market on the Chisholm Trail. Perils along the way include cattle rustlers and wranglers.

Relive the excitement of the era before the railroad came to Texas. With Chisholm Trail Command Module, you become the foreman on a cattle drive attempting to get your herd to market. As you travel the Chisholm Trail, you are besieged by perils, including rustlers trying to steal your cattle and wranglers trying to put their brands on your steers.

Chisholm Trail provides the thrill of frontier days as you:

Each time you successfully survive a day on the drive, you complete another segment of the trail and add another steer to your herd.

Still another maze classic. This one requires you to be fast on the draw! Be a cowboy moving a "steer" through the maze. Your goal: kill four "Brand" monsters plus the worst one of all: the weird "Wrangler." (Joysticks recommended.)

By pressing "*#*" in that set sequence when the game prompts the player to input the desired starting level the player enters a cheat mode where he/she can select the specific day (there are 7 days per level) and the number of shops to begin the game with. The catch, when the player does this, the word "TEST" displays on the top left-hand side of the screen making it very difficult to fool others that the player is a Chisholm Trail master. Friends and family would know the player cheated.

Imagine yourself as a cattle rancher before the railroad came to Texas. To get your cattle to market in Kansas City and Chicago, you would have to drive your herd along a cattle trail, such as the Chisholm Trail. This trail extended from San Antonio, Texas, to Abilene, Kansas. From Abilene, the cattle were sent by rail to market in the East.

Although this sounds fairly simple, the cowboys on a cattle drive didn't have an easy time. Daily, they were besieged by perils, including rustlers trying to steal the cattle and steers straying from the rest of the herd. Often, these stray steers would join another herd, where they were branded by the wranglers driving that herd.

Now, with the Chisholm Trail Solid State Software™ Command Module, you can relive the excitement of this era. Become the foreman on a cattle drive attempting to get your herd to market along the Chisholm Trail. The module lets you experience, day-by-day, the thrill of accomplishment as you earn points by:

In addition, each time you successfully survive a day on the drive, you complete another segment of the trail and add another steer to your herd.

Movement on the screen can be controlled by the Wired Remote Controllers or from the keyboard.

After you choose the game from the master selection list, the Chisholm Trail title screen appears. Press any key within two seconds to go on to the level-of-play display, or wait for the title sequence to end and the next display to appear automatically.

To see a demonstration of the game, do not select a level of play. After a moment, a sample game begins. When you are ready to start your own game, press any key and the game's title screen reappears. Press any key to proceed to the level-of-play display.

Note that, with each successive day, the wranglers trying to brand your steer also become smarter.

Press a number from 1 through 9.

After you select the level of play, the cattle drive begins. Your herd is in a corral on the left side of the display. At the top, bottom, and right of the display are six branding chutes. The four wranglers trying to brand your herd come out of four of these chutes. Gathered in their campground in the middle of the display are the rustlers. However, only one rustler at a time leaves the camp to chase you.

Above the playing area, the day number, mileage (current score), and high score for this session are displayed. Finally, counters appear above and below your corral to tell you how many shots remain for your current steer.

The number of steers you have at the start of the game depends on your level of play. However, a maximum of four steers appear in the corral. If you have more than four, four are still displayed when one leaves the corral and moves into the playing area.

If you want to pause while playing a game, press P. The game in progress pauses indefinitely. Press P again to continue the game. After a rustler or wrangler catches any of your steers, you can either stop the game and return to the game's title screen by pressing BACK or begin the game over by pressing REDO.

As soon as the playing area appears, the game begins. One of your steers leaves the corral and is ready to begin the first day on trail, eliminating rustlers and wranglers. To move the steer around the playing area, press the arrow keys, ↑ (E), ← (S), → (D), and ↓ (X). Then, when you are ready to fire at a rustler or wrangler, aim the steer in the desired direction and press Q or Y. The steer has a limited firing range; therefore, you must be fairly close to your target before your shots can destroy it. (Note: If you are using the Wired Remote Controllers, move the lever to direct the steer and press the FIRE button to fire a shot.)

In addition to the rustlers, four wranglers in the shape of brands are also after the steer. The wranglers try to "brand" your steer by firing at him. When you destroy a wrangler, it returns to its home chute, which is the same chute it comes out of at the start of the game. However, be careful after destroying a wrangler! If you are in line with a chute's opening when the wrangler is inside, the wrangler fires a high-powered rifle to eliminate the steer. After a brief delay, the wrangler moves back into the playing area. Destroying a wrangler adds to your mileage (score), but does not help you proceed to the next day.

As you move the steer around the playing area, you want to destroy all of the rustlers. For each rustler you eliminate, you receive 250 "miles"; wranglers are worth 150 "miles."

After you shoot all of the rustlers on the day in progress, the state of Texas is displayed to illustrate that you completed another segment of the Chisholm Trail. Press any key to continue. When the playing area reappears, another steer is added to your herd in the corral.

You also receive another steer each time you complete 10,000 miles.

End of the Drive

When your last steer is rustled or wrangled, the game is over. Press REDO to play another game on the same level. Press BACK to return to the Chisholm Trail title screen and select a different level of play. To end the session with the module, press QUIT to return to the master title screen.