Alexis Adams was the wife of the programmer Scott Adams. While Scott worked on his first game called Adventureland, Alexis was pregnant. She was upset that he was spending so much time programming the game, besides working his day job. After completing this first game, Scott decided he had better be done programming adventure games when to his surprise, Alexis convinced him to write the program Adventure: Pirate's Adventure. She assisted him in the programming of it. 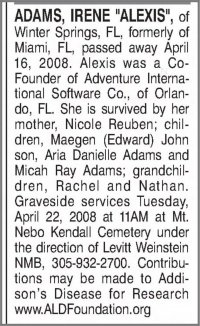 Alexis and Scott Adams were the co-founders of Adventure International and together, created adventure games. They met through a computer dating service that they both applied to. Alexis and Scott later divorced. Irene "Alexis" Adams passed away on April 16, 2008.

Alexis is credited with working on the following games for Adventure International: