The Addition and Subtraction 1 Command Module provides young children with an exciting introduction to basic mathematical concepts involving the numbers zero through nine. The nine colorful activities begin with counting and move on to addition and subtraction, building on the skills learned in previous exercises.

The optional Texas Instruments Solid State SpeechTM Synthesizerr (sold separately) adds the feature of computer speech to the activities. Your child can now hear, as well as see, the instructions and exercises in the module.

This Solid State SoftwareTM Command Module is designed to be used with the Texas Instruments Home Computer. Its preprogrammed solid-state memory expands the power, versatility, and capability of your Home Computer.

Numbers hold a particular fascination for children, and they see an understanding of numerical concepts as a link to growing up. It's an important advantage for children to be introduced to mathematical skills at a young age, when their natural curiosity and interest is at a high level.

The Addition and Subtraction 1 Solid State SoftwareTM Command Module is designed to provide your child with a positive introduction to mathematics. It was developed by the educational staff of Scott, Foresman and Company (a leading educational publisher) in cooperation with the staff of the Texas Instruments Learning Center. The activities are fun and, at the same time, challenging. By working through and mastering each activity, your child gains skills in basic addition and subtraction facts.

The module begins by teaching the basic concept of counting to nine. Step-by-step, the principles of addition and subtraction, with the numbers zero through nine, are introduced. Your child watches and listens to tutorial problems at the beginning of each activity. The computer then provides the choice of continuing with more example problems or moving on to the practice drill. In this way, learning progresses at your child's own pace.

The Addition and Subtraction 1 module advances your child to more difficult drills according to the number of correct responses given in each activity. The computer automatically advances to the next activity if your child answers 80 percent of the drill problems correctly. If less than 60 percent of the problems are answered correctly, the computer returns to the appropriate previous activity, providing your child with more practice. This automation helps to alleviate anxieties caused by consistently incorrect responses, thus making the learning of mathematical skills a pleasurable and rewarding experience.

With this module, Texas Instruments continues its tradition of applying innovative Solid State SpeechTM technology to educational activities. Addition and Subtraction 1 is designed to work with or without the Texas Instruments Solid State SpeechTM Synthesizer (sold separately). However, the Speech Synthesizer must be attached to activate the voice of the computer. The computer's voice then gives directions, reads the equations, and encourages your child to "Try again" when he or she gives an incorrect answer. The addition of speech strengthens the learning process since your child can hear, as well as see, the correct answers.

The letters and numbers on the keyboard are arranged in the same order found on standard typewriter keyboards. If your child is not familiar with a typewriter or has not used your Home Computer before, take a few minutes to acquaint him or her with the keyboard. Point out the row of number keys at the top and the rows of letter keys below. Show your child how to insert the module and how to select the activities. This brief "tour" of the Computer will help reinforce the correct procedures for your child and instill confidence as he or she starts out in a new world of computers.

Today, computers are involved in almost every aspect of life. Working with this module can help your child become familiar with computers and their operation. Since computer-aided instruction is more common in the classroom every year, this knowledge can give your child an important advantage.

After the Addition and Subtraction 1 title screen appears, the computer displays a selection list of the nine activities in the module.

Your child presses the number corresponding to the activity he or she wants to try. For this sample activity, press 3 for Addition Action. (We'll assume that the Speech Synthesizer is attached for this example.) 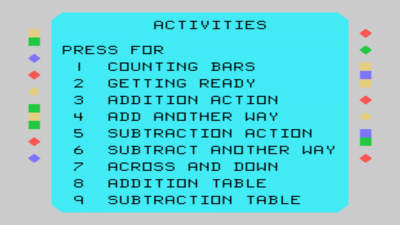 Next, the tutorial segment begins. Two boxes containing objects appear on the screen. The numbers and words corresponding to the number of objects are positioned below each box.

The objects join together in the left-hand box while the numbers form an addition sentence below. The corresponding word sentence then appears, and the computer reads it aloud.

The next display asks your child if he or she would like to see another example. Your child may press 1 for "Yes." If he or she is ready to go on to the drill, press 2 for "No." For now, press 2. Then press BEGIN to leave the drill and return to the activity selection list. 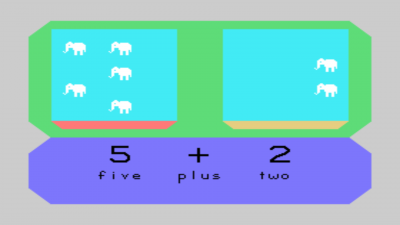 The "cursor" is displayed as a white box with a flashing red border. It prompts your child to respond. When the cursor is flashing, you may answer a problem or change displays.

In activities 1 through 7, your child has two chances to answer each problem in the drill segment. After the second incorrect response, the computer works through the problem step-by-step, showing how to arrive at the answer. In activities 8 and 9, the computer moves to a tutorial example after one incorrect response. Following activities 8 and 9, a list of up to 32 problems which were answered incorrectly appears with the message "Study these for next time!"

Addition and Subtraction 1 is divided into nine activities designed to illustrate the basic principles of addition and subtraction with the numbers zero through nine. Since each activity builds upon the skills learned in the previous activities, it is best that your child starts with Activity 1 Counting Bars and works through the sections in order. The module automatically advances through the activities in their intended sequence. After your child has worked with the module and has mastered the activities, he or she may wish to skip around to a favorite or more challenging drill. Each activity begins with a tutorial routine and lets your child proceed to the drill when he or she is ready.

The first activity introduces the concept of counting from zero to nine. In the tutorial segment, stacks of boxes appear on the screen one at a time, and the computer counts them. In the drill, your child is asked to press the number key corresponding to the number of boxes in each stack.

Activity 2 reinforces the counting concept by counting pictures of objects. Two large boxes containing objects appear on the display. The objects in each box are counted, and the corresponding number is displayed under the box. In the following drill, the computer displays "How many?", prompting your child to press the key corresponding to the number of objects in each box.

Addition Action stresses the "bringing together" concept of addition using pictures of objects. Two boxes containing objects appear on the display. The objects in the box on the right move into the left box. The corresponding addition problem appears on the display, and the computer supplies the sum. A word sentence reinforces the concept. The drill asks your child to answer the addition problems.

Activity 7: Across and Down

This activity uses a game to reinforce the relationship between numbers in addition. The module displays a table with the numbers zero through nine across the top and down the left side. The flashing cursor appears at the intersection of a row and a column, prompting your child to add the two numbers and enter the answer. The game continues until the table is complete.

The last activity is a game designed to reinforce the relationship between numbers in subtraction. A table with numbers on the left side appears on the display. The computer randomly chooses a number to be subtracted from each of the numbers in the box and displays it at the top. Your child is then asked to type the answer to each problem.