Yahtzee is a video game version of the popular strategy dice game of the same name, created by Milton Bradley for the TI-99/4 and TI-99/4A home computer systems. It was part of Milton Bradley's Gamevision series that was scheduled to release at the same time Texas Instruments released the TI-99/4. The Gamevision version of the game was released during the 3rd quarter of 1979 under part number MB 4967 and retailing for $24.95 (USD). Texas Instruments later re-released Yahtzee on its own during the 2nd quarter of 1980 with the part number PHM 3039, retailing at $29.95 (USD). Yahtzee was programmed by Elaine Henshon, and was released on Solid State SoftwareTM Command Module cartridge.

Yahtzee for the TI-99 home computer system shares similarities with the regular dice-based game of Yahtzee with some unique differences. When the game begins, the option is presented to play either a one or two-player game. In one-player mode, the player plays against the computer. Two-player mode allows for two people to play against each other. A unique option that the TI-99 version offers at the beginning of either one or two-player modes is to play regular mode, where each player rolls their first roll as normal, or challenge mode, where each player starts off with the same 5 dice on the first roll. After each roll of the dice, the player selects which dice to keep, and rolls the remaining dice. Each player or the computer player takes up to three rolls of the dice and selects which space on the scorecard to place the points. At the end of each game, the player or computer player with the highest point total wins.

Lets you play this popular game of chance while the computer rolls the dice and keeps score for you. You concentrate on strategy!

You roll a two, a three, a four, and two fives. Do you try for your fives or go for a large straight? With the Yahtzee Command Module, the computer randomizes each roll fo the dice, and you indicate which dice, if any, you want to keep. After a maximum of three rolls, you enter your points on the scoreboard.

You roll a two, a three, a four, and two fives. Do you try for your fives or go for a large straight? With the Yahtzee Solid State SoftwareTM Command Module developed for Texas Instruments by the Milton Bradley Company, you determine your game strategy, while the computer rolls the dice and keeps score for you.

The Yahtzee module, based on the popular game of chance, gives you options for one or two players and regular or Challenge Yahtzee. The computer randomizes each roll of the dice, and you indicate which dice, if any, you want to keep. After a maximum of three rolls, you enter your points on the scoreboard. The computer automatically figures your total score for you. After both players' scores are complete, the player with the highest score wins.

After you select the module, the player selection display appears. Press 1 to play Yahtzee against the computer. If you are competing against a friend, press 2 for two players. Or, for information on the keys used to play the game, press AID before you select the number of players.

Now you are ready to select the number of players. Type 1 or 2.

After you select the options, the scoreboard appears. 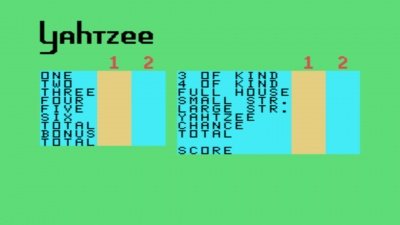 The roll number is displayed on the left side of the screen under the scoreboard, and you may roll the dice up to three times. After the third roll, you must enter your points. However, you can enter points after your first or second roll, if you prefer. Note: After each turn, you must enter a score. If you cannot enter points in any of the categories, enter a zero in any category you choose.

After Player 1's score is entered, it's Player 2's turn. In a one-player game, the computer automatically rolls next. With two players, Player 2 presses ENTER and then proceeds as Player 1 did. Continue taking turns until the entire scoreboard is completed (13 turns each).

As you play a game, you may want to start over. Press BEGIN to return to the player selection display.

Points are scored in Yahtzee based on the roll of the dice. In the first column of the scoreboard, you receive the sum of all dice with the same value. For example, if you roll 1, 2, 3, 2, 2, you can score 1 point for ones, 6 points for twos, or 3 points for threes. As you move the cursor, each possible score appears in the appropriate category. To enter your points where you want them, position the cursor correctly, and then press ENTER.

If your points in the first column total 63 or more, you automatically receive a bonus of 35 points. To score 63 points, you need to roll at least three of each die value. However, if you score more than three dice of one value, you could score fewer than three of a lower value and still get the bonus.

The second column of the scoreboard is scored as follows.

Your first column total is added to your points in the second column to calculate your grand total for each game.

Occasionally, you may roll more than one Yahtzee in a game. If so, and if you already have 50 points in the Yahtzee category, the computer automatically adds 100 points to your "Yahtzee" total. Then, if you have not already done so, you must also enter the total of the five die in the category corresponding to the die value in the first column. If you have already entered points in that category. you can enter points as Three of a Kind, Four of a Kind, Full House. Small Straight, Large Straight, or Chance in the second column.

As you play Yahtzee, you'll realize that you don't always roll what you need, even with three tries. When this happens, you must still enter a score. However, some scoring strategy may help you win the game.

On the scoreboard one category is labeled "Chance." If, after the third roll, you don't have a combination you want to enter in a specific category, simply move the cursor to "Chance" and press ENTER. As an alternative, if you roll one or two ones, you could count that as your score for ones, saving the larger values to try to score enough points for the 35-point bonus.

Even with "Chance" and "Ones," you might still receive another roll which you cannot use. If so, you must enter a zero in one of the scoring categories. Some common places for entering a zero are "Yahtzee" and "Four of a Kind." Once a zero is entered, however, it cannot be changed.

Many rolls of the dice can be entered in more than one category. Both a "Four of a Kind" and a "Full House" roll can be scored as "Three of a Kind" or as the die value in the first column. Also a "Large Straight" can be counted as a "Small Straight" instead. The more you play Yahtzee, the more your scoring strategy should improve.

When the scoreboard is completed (after 13 rounds), the game is over. The computer flashes a red box around the winning score and plays a victory tune.

You are then asked if you want to replay the game. Press REDO to play again with the same options. To choose new options, press BACK and the player selection display appears.

When you have finished playing Yahtzee, press QUIT to return to the master title screen.