The player in Word Invasion controls a magic ring that protects an Alien Octopus (A.O.). The player uses either keyboard keys or the optional remote control to move and fire from the magic ring. The goal is to line up the magic ring which displays a part of speech corresponding to the specific part of speech, then firing on it destroying the word and protecting the Alien Octopus. The intention is to keep the Alien Octupus alive as long as possible.

An arcade format helps your child identify parts of speech while defending an octopus against invading words. Suitable for grades two through six.

Fast action and colorful graphics teach the 6 major parts of speech in an arcade-game format. A friendly alien octopus must protect her underwater territory from a screen full of invading words. Her weapon: a magic ring that moves from tentacle to tentacle, firing at words. Builds Grammar skills. (Wired Remote Controllers recommended.)

The ARCADEMICTM SKILL BUILDERS IN LANGUAGE ARTS series was created by Developmental Learning Materials, Jerry Chaffin, Bill Maxwell, and Barbara Thompson. The ARCADEMIC approach uses an arcade game format, colorful graphics, and lively action to create an exciting atmosphere for practicing important learning skills. ARCADEMIC programs provide for the educational needs of individual learners. They allow children to develop skills before progressing to the next level of difficulty. These programs combine learning with fun.

The ARCADEMICTM approach to learning is based on these principles:

Arcade games are fun and exciting, and no one has to encourage a child to play. When applied to learning, the arcade game format motivates children to persist and to remain involved in the subject.

Arcade games start players at a level above their skill, producing high rates of error. Players do not view the errors as failure, but as a challenge to improve. The ARCADEMIC approach also encourages improvement by

providing a game with preset options. This preset version is played at a rapid speed and at an advanced level of difficulty.

The arcade game format encourages concentration because it requires fast response in a short period of time.

The arcade game format provides immediate feedback. Players know instantly whether their answer is correct. There is no limit on improvement. Players can make as high a score as their skills permit. They can see their scores as they play. Players know immediately how well they are doing.

The ARCADEMIC approach encourages involvement by allowing selection of many features to fit individual needs. Players can select such features as speed of play, level of difficulty, and the time limit of the game.

Word Invasion, one of the programs in the Language Arts series, helps your child recognize parts of speech, a skill necessary for success in reading and writing. Your child helps A.O. (Alien Octopus) battle an invasion of words. As columns of words approach, the name of a part of speech such as pronoun, verb, or adjective appears beneath the octopus. Your child scores a hit by firing at a word that matches the part of speech. While having fun helping the octopus, your child is also practicing an important language arts skill.

With Word Invasion, your child can

Introducing Your Child to the TI Home Computer

Your Home Computer provides a variety of learning experiences for children. Young children may need assistance in learning how to use the computer or the software. Supervise your child until you feel confident in his or her ability to operate the computer and use the software independently. First, acquaint yourself with the manual. Read "Using the Solid State Cartridge" to show your child how to turn on the computer and insert the cartridge. Then, introduce your child to the keyboard and the program activities.

If your child is unfamiliar with a typewriter, he or she may need help using the computer keyboard.

1. Show your child how to press the keys correctly.

2. Practice locating and pressing each key shown in the Quick Reference Guide.

As with any electronic equipment, there are certain safety guidelines children should follow.

1. Keep hands away from cords and cables.

2. Keep fingers away from openings in the computer or cartridge.

3. Keep liquid and food away from the computer.

4. Keep the computer clear of heavy objects and clutter.

With Word Invasion, your child has two choices-to begin playing a version of Word Invasion with preset options or to select different options. The preset game is intended to challenge your child to discover existing skills and knowledge. Some children may want to continue using the preset options, but others may want to adjust the game options. To determine which options are appropriate, watch your child play the preset game.

The preset game uses these options:

Speeds in Word Invasion range from 1 (slowest) to 9 (fastest).

Word Invasion can be played with 2 (minimum) to 6 (maximum) parts of speech.

Word Invasion offers four reading levels for each part of speech, ranging from 1 (least difficult) to 3 (most difficult). Level 4 includes words from levels 2 and 3.

Time limit in Word Invasion can range from 1 to 5 minutes.

After selecting Word Invasion, your child sees a series of screens followed by an instruction screen that says PRESS ANY KEY TO PLAY. Your child presses any key and the preset game begins immediately.

As the game begins, your child sees A.O. (Alien Octopus) facing an invasion of words. Your child identifies a word that matches the part of speech beneath the octopus. Then, your child moves A.O.'s magic ring until it is under the word. When the ring is in position, your child fires and scores a "hit." If your child fires at a word that does not match the part of speech or at a column without words, a "miss" is recorded. Your child can move and fire the magic ring using either the keyboard or the Joystick Controllers.

To make an invading word disappear, your child

Move and fire the ring by pressing these keys.

Move and fire the ring using the Joystick Controllers.

Note: The ALPHA LOCK must be in the OFF (up) position when using the Joystick Controllers.

Word Invasion provides options that allow the game to be tailored to your child's individual needs. Your child can change options before or after a game. By changing options, your child controls speed of the advancing words, parts of speech to be used, reading level of the words, and time limit of the game.

Press AID to go to the "Game Control Options" screen from 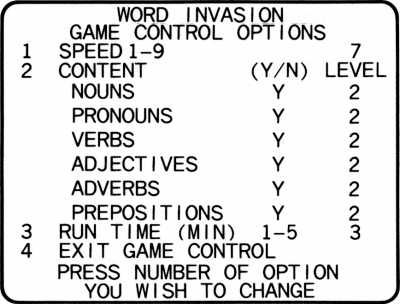 Your child can select the speed at which words advance toward the bottom of the screen. Select speeds from 1 (slowest) to 9 (fastest).

To select a speed

Your child can set a time limit of one to five minutes for each game.

To select a run time

Your child can set a time limit of one to five minutes for each game.

To select a run time

To begin a game using the new options

Note: Options remain in effect until your child changes them or presses QUIT. Pressing QUIT returns to the preset options.

If you select new options and then press BEGIN before pressing 4 to leave the "Game Control Options" screen, the game returns to the previous options.

The first two times a word reaches the octopus, your child continues the game with a new screen of words. The game ends when words reach the octopus three times or the time limit expires. Your child can also press P or T to end the game early. At the end of each game, the "Record Your Score" screen displays the score. When the game ends, your child can choose to play again using the same options or change the options for a new challenge.

The game ends when

• QUIT is pressed to return to the master title screen

At the end of the game, the "Record Your Score" screen appears. This screen shows