Defender for the TI-99/4A is a port of the 1981 Williams Electronics arcade game by the same name. The TI-99/4A version was published and distributed by Atarisoft on Solid State SoftwareTM Command Module cartridge. It was released during the fourth quarter of 1983. Defender's part number for the TI home computer system is RX 8506 and originally sold for $44.95 (USD).

Defender is a two-dimensional side-scrolling shooter. It occurs on the surface of an unknown and unnamed planet. The player can move his/her ship left or right and up or down. The player's goal is to destroy as many alien invader's spaceships as possible and to prevent them from abducting the humanoids on the surface of the planet. When the player destroys all the enemies, he/she advances to the next level. The player loses a ship when it gets hit by enemy fire or if hyperspace jumps go wrong. The game ends when the player loses all his/her ships.

Back of Retail Packaging

The planet's fate is in your hands. Landers, Bombers, Baiters, Pods, and Swarmers. The alien attack has come, and defeat at the hands of crazed invaders threatens the humanoids. Their only hope is the spaceship, Defender. Armed with smart bombs and able to shift into hyperspace, Defender evens the score only to become the object of another foul attack: kidnapped humanoids transformed into killer mutants!

The sophisticated Defender spaceship is your only hope against an alien attack that takes many forms. Armed with smart bombs and able to shift into hyperspace, Defender evens the score!

The Arcade version of Defender appears in the book 1001 Video Games You Must Play Before You Die by general editor Tony Mott. [1] 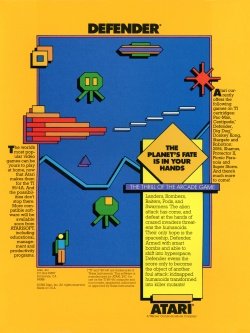 Back of Defender Retail Packaging
Inserting the Cartridge

Plug the joystick into the joystick port. Using this one device, you can thrust, reverse, and change Defender's altitude - giving you unmatched freedom of the skies as you battle the invaders. Press the fire button to fire missiles.

The options for game selection are as follows:

Press + (plus) key to display options one at a time to make your selection.

Restart: The + (plus) will end game and return to option screen.

Smart Bombs: The space bar is used to activate a smart bomb which destroys all aliens on the screen.

Hyperspace: Any other key causes the Defender ship to hyperspace to a random location somewhere in the playfield.

Your view-screen shows your immediate area, but the Scanner at the top of the screen shows a much wider view. The area covered by your view-screen is bracketed in the center of the Scanner, so you can see what's happening to your right and left-a crucial factor with so many aliens around. By using your Scanner you can tell which kinds of aliens are where, and -more important - which of your humanoids are in danger. Humanoids and the different types of alien ships are distinguished by different colored blips.

Each of the alien ships has a different function.

Bombers lay mines to trap you - you can't shoot mines, so you must avoid them.

Baiters appear if you take too long to finish off a wave - they move faster than Defender and fire white charges as they home in on him.

Mutants - transformed humanoids - are very dangerous. Once a humanoid is lost to you, spare no effort in trying to destroy it. They'll fly directly above or below you (where you can't hit them) and then charge.

The Pod is the most dangerous, because when it's destroyed it releases Swarmers. Swarmers track you closely, so zap them as quickly as you can.

All aliens except Landers can exit at the bottom of the screen and emerge from the top, or vice versa.

You begin the game with ten humanoids. When a humanoid is kidnapped, it cries out for help. The Scanner is the fastest way to spot its position.

If the Lander succeeds in carrying a humanoid to the top of the screen, the humanoid becomes a Mutant and returns to attack Defender. When all of the humanoids become mutants, or are destroyed, the planet explodes and vanishes. You continue to play and score points. With every fifth wave, a destroyed planet reappears and all ten humanoids are replaced.

150 Points for each Lander plus: